Its always great to do a cashless deal, and having only recently started fly fishing in earnest, deals can be made with lifelong fishermen who are wishing to take up deer management. The other evening such a pal and I met up after work, we chatted through the trials and tribulations of each of our days and pinched ourselves that we were lucky enough to be off out into the local countryside to look for a Roe buck or Muntjac. Richard has previously shot forty plus deer, Muntjac, Roe, Fallow and a leucitic (white) Sika pricket, this has generally been done from a highseat with the ready-made backstop of the ground to offer confidence when taking the shot, so my intention this May evening was to set him up for his own foot stalk which would hopefully be a memorable one. 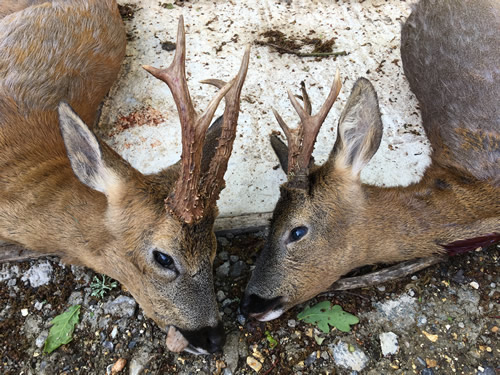 As ever after we’d crashed around, changing shoes for boots and sorting out sticks, dogs and loading rifles we were to look up and spot a young buck cross the main ride, so we scuttled down the ride quickly to where he had crossed, only to spy him drifting off into the hazel coppice, we had both brought our Pulsar handheld TI spotters and tried to follow him further, but stalking through the wood we lost him. We continued with my intention, which was to get out to the edge of the wood, where we could perhaps intercept deer as they began to feed in the fields. With the Labrador helping by raising his head and scenting we squeezed through the hazel and hawthorn hedge and negotiated a rather dilapidated ‘Tiger trap’ style hunt fence, to enter a youngish plantation with dappled shade.

Sabbath, the Lab, was now very intent and stood peering into the cover, so we squatted with him and scanned the area with our spotters, the scene was illuminating. Four heat sources glowed ahead, along with binoculars, we concurred it was a family group of Muntjac and a Roe buck. Sitting with the dog, Richard was sent off to stalk and cull the Roe. Whilst he was gone, all three of the Muntjac approached us and stood with their noses in the air trying to ascertain what we actually were, dog or man or both? After a short while there was the resounding ‘bang – thwack’ of a well-placed shot, it must have been fairly close as the sounds were almost indistinguishable. We waited until Richard appeared with a broad grin and an accomplished look on his face.

Having just been signed up by Napier to be one of their Field Masters, a group dedicated to the pursuit of excellence in field sports. Now was my opportunity to use some of their Apex Range, and the Apex 46 hunters knife which fresh out of the box and sheath easily gralloched the Roe buck once it was hung from a suitable tree by the ingenious Apex tree hugger with its rubberised webbing and S hooks. With the addition of rubber gloves the animal was quickly dealt with offering a quick and easy suspended gralloch. I rarely cut open the sternum as the carcass loses shape and it offers more opportunity for contamination, as more flesh is open to the environment. The Apex Truck Click with Auto lift has been very useful for gralloching larger deer on the tow hitch, making it much easier to swing them into the back of a pick up when lone working too.

With some light left in the evening we got the carcass back to the track side, and then we pottered off along another ride, only to be confronted by a larger buck browsing on the vegetation under the overhanging hazel coppice. Sliding, my first rifle a .243, off my shoulder and onto the Spartan Sentinel stick system in the quickly decreasing light, approximating the shot to be 120m, the buck turned enough to offer a shot to the front left shoulder. There was the satisfying thwack as the bullet struck, it jumped up and kicked out his back legs, and then ran towards us before crashing into the woodland some metres away, the bullet strike and reaction to shot would have never been visible with an unmoderated rifle, due to the muzzle flip.

We stood and chatted about the shot and the animal for a number of minutes as Sab stared unblinkingly into the wood, waiting for us to move forward and find the buck. Approaching the strike first there was nothing visible on the ground, my heart sank, although I was confident with the shot, there was no blood, tissue or pins (hair). Out came the thermal spotters, still nothing, admittedly the bracken, grasses and brambles had begun to grow up. With confidence I cast Sab back and as Richard and I both stepped forward Sab appeared back through the bracken and we all stumbled across the dead buck, laid on his back in a forestry extraction rut, well below ones line of sight. The bullet had never exited, so with no exit wound there was not going to be any blood at the strike and also no blood for a trail, Sab had air scented the animal in the cover.

It was a successful and satisfying evening, all within half a kilometre, if that. The forester would be happier and Richard’s freezer would be ready for the summer BBQs.